We are happy to announce the immediate availability of Via 22.2. This version brings great improvements to working with shape files (or other GIS data, e.g. GeoJSON or GeoPackage data sources), as well as a brand new label layer.

The Shapes Layer now support the time-dependent display of individual shapes, based on attribute values of each shape. Point features can now be used as data source for the (OD-)Aggregation analysis. And the Shape query can now search for arbitrary attribute values, and not only by id. And finally, line-string features are able to show a label text.

Shape query finding all villages starting with “A”.

Good visualizations often contain labels and markers to highlight cities, landmarks or other special places. In Via, such labels could be added in the past using the XY Plotter, but it was a rather cumbersome process as first the correct coordinates had to be defined, then all the additional attributes like name, color or size had to be manually entered in a CSV file, and the file then be added and visualized. With the new Label layer, markers or labels can easily be added to the map with a few mouse clicks. Additional attributes used for styling the markers can be added as well directly in Via.

Adding labels and markers directly in Via.

For research projects or alternative visualizations, it is often desired to have “GPS trace-like” data of simulated vehicles, simply consisting of coordinates and timestamps. Via can now export such data from loaded data events data.

After a longer wait than usual, we are happy to finally announce Via 22.1. The new version of Via has a strong focus on public transport analysis improvements and includes several other smaller enhancements and bugfixes as well.

Via includes various functionality to analyze the performance of public transit routes. The more detailed public transport is modelled in MATSim, the larger the number of transit routes per line may get (e.g. having different routes or time profiles along routes for different times of day; additional partial routes during rush hours). Looking only at a single line transit route thus usually does not provide a very good picture of what’s going on. Via 22.1 now offers the functionality to analyze multiple routes—even from different lines—together as one to get a complete analysis of a network segment. 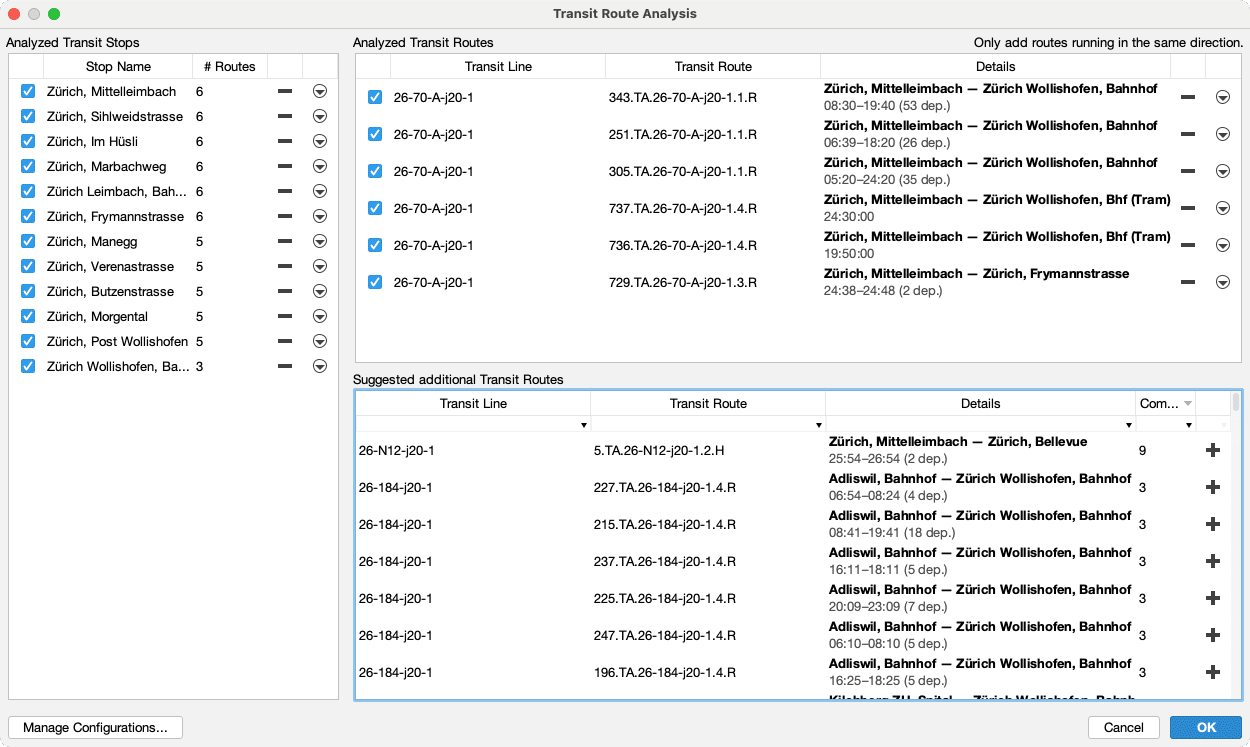 Visualization of transit analyses on the map

The aforementioned transit analysis charts usually get presented in a separate window. In Via 22.1, it is possible to visualize the aggregated values not only as charts, but directly as features on the map. This allows to quickly represent traffic flows between transit stops on the map. 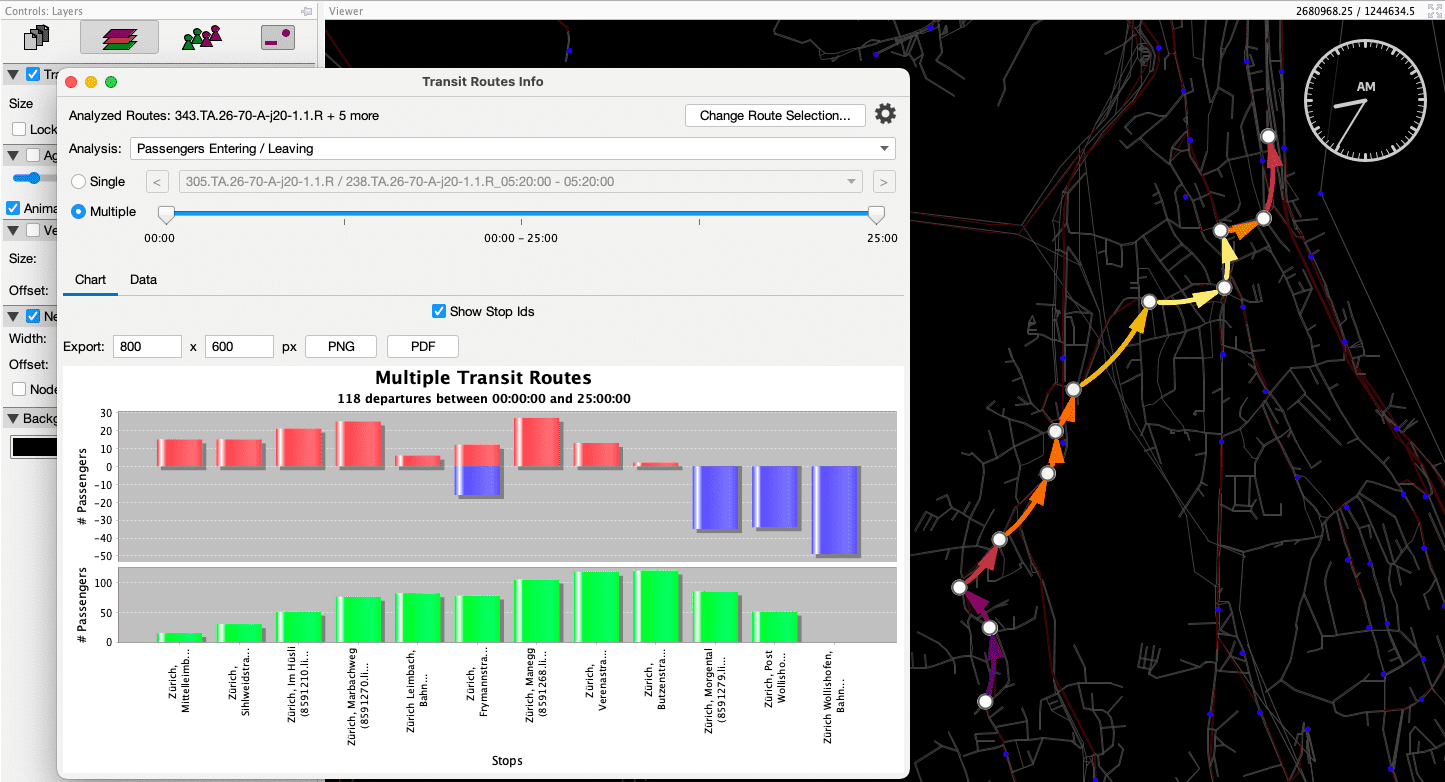 In addition to the transit-related improvements listed above, the following smaller changes and bugfixes are also part of Via 22.1:

Towards the end of last week, a very critical vulnerability was found in a commonly used Java library (Log4J). This vulnerability (named Log4Shell sometimes) could result in the execution of remote code in some cases.

Considering that Via and Tramola are written in Java, we received inquiries from concerned customers related to the security of those products, which we want to address in open for everybody:

Via currently uses Log4J 1.2.17, which is older than the vulnerable Log4J 2.x and is thus not affected. You can continue to use your existing version of Via.

Tramola (currently still in beta) used a vulnerable version of Log4J, and being a Web application, is at high risk. Over the last few days, we’ve updated Tramola to use the fixed version of Log4J 2.16.0 to mitigate the problem (the first update was to Log4J 2.15.0, and a second update upgraded Log4J to 2.16.0). This fixed version is available to all current beta testers at the download location communicated to them. If you are a current beta-tester of Tramola, please update as soon as possible.

We are happy to announce Via 21.1 with great improvements to several plugins of Via (OD Aggregation, Movie Recording, Scripting), as well as many other smaller improvements and bug fixes.

OD Aggregator has always allowed to show the relations of single zones when querying them. But there are cases where the relations of multiple, or better: all, zones should be visualized. The new visualization option in Via 21.1 allows to visualize all or a filtered subset of all relations as directed lines on the map.

The relations can be filtered, and styled based on various attributes. To keep the visualization clean, it is possible to only visualize e.g. the top 10% of relations, or the top 50 relations.

The encoding of movies into the MP4 and ProRes format was heavily improved. Converting a series of images to a movie in one of these formats is now 20-25% faster.

The conversion of images to movies is not only usable for screenshots recorded by Via, but also for images created by other tools. Some of these output images with a transparent background, which resulted in artefacts or black backgrounds in the created movie. To overcome this, Via now offers the option to add a fixed-color background to transparent images.

Re-using scripts to create automated analyses or recordings of different, but similar scenarios required at least the adaption of paths to load or output the correct files. This made automating Via error-prone, or difficult when integrating into external workflows.

In Via 21.1, scripts can interact with the user by asking to select a file or directory, so scripts can be set up to work on user-selected data. To allow such scripts to be used in fully automated setups, it is now also possible to pass parameters to Via scripts, so the same script can be used with different parameters in multiple runs.

Check the in-app script examples to learn more about using parameters and user-interaction in scripts.

In addition to the major improvements listed above, the following smaller changes and bugfixes are also part of Via 21.1:

Since the start of Simunto about 3 years ago, we had a vision: Make it simpler and easier to use MATSim. While Via is a very powerful tool to analyze and visualize MATSim data, it focuses mostly on the outcome of a MATSim simulation, but not on the input or the simulation itself. Thus, the planning and work started on an additional tool to help users create, edit and run MATSim simulations with much more ease than ever before. Now, we’re finally able to present this new tool: Tramola!

Tramola helps you to manage your scenarios, allows you to easily create case studies and monitor running simulations, and enables you to quickly gain insights into simulation results by powerful reporting and visualizations.

Tramola is a web-based application and runs in your web browser. It allows you to manage multiple scenarios, edit scenario data like network or transit schedule, and start runs by the push of a button after editing the configuration file in a user-friendly editor. Running simulations report critical measurements like modal split and memory consumption regularly back to the server, such that first analyses can already be performed while the simulation is still running.

More details are available on the new Tramola page. 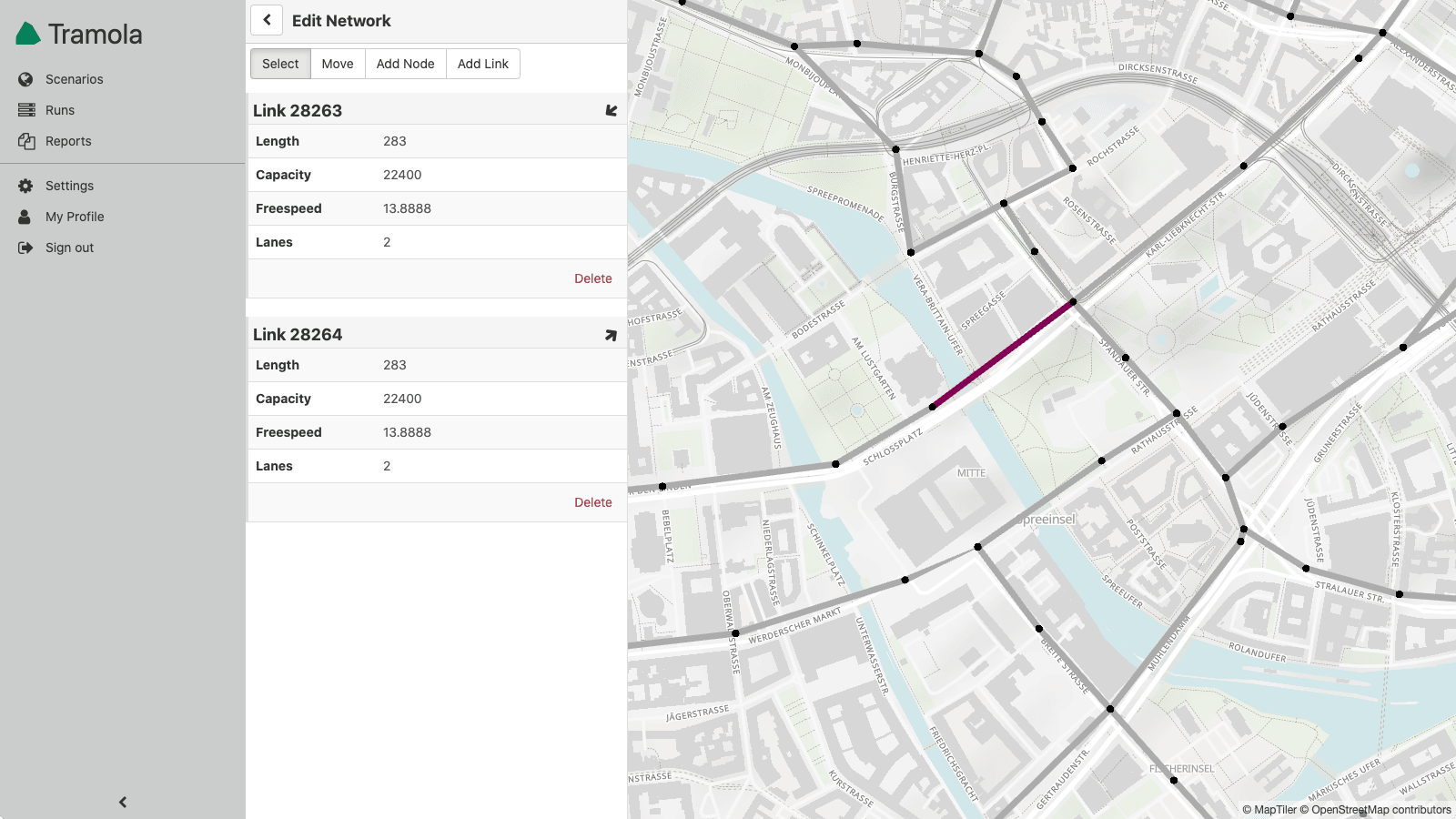 Modify the config before starting a run: 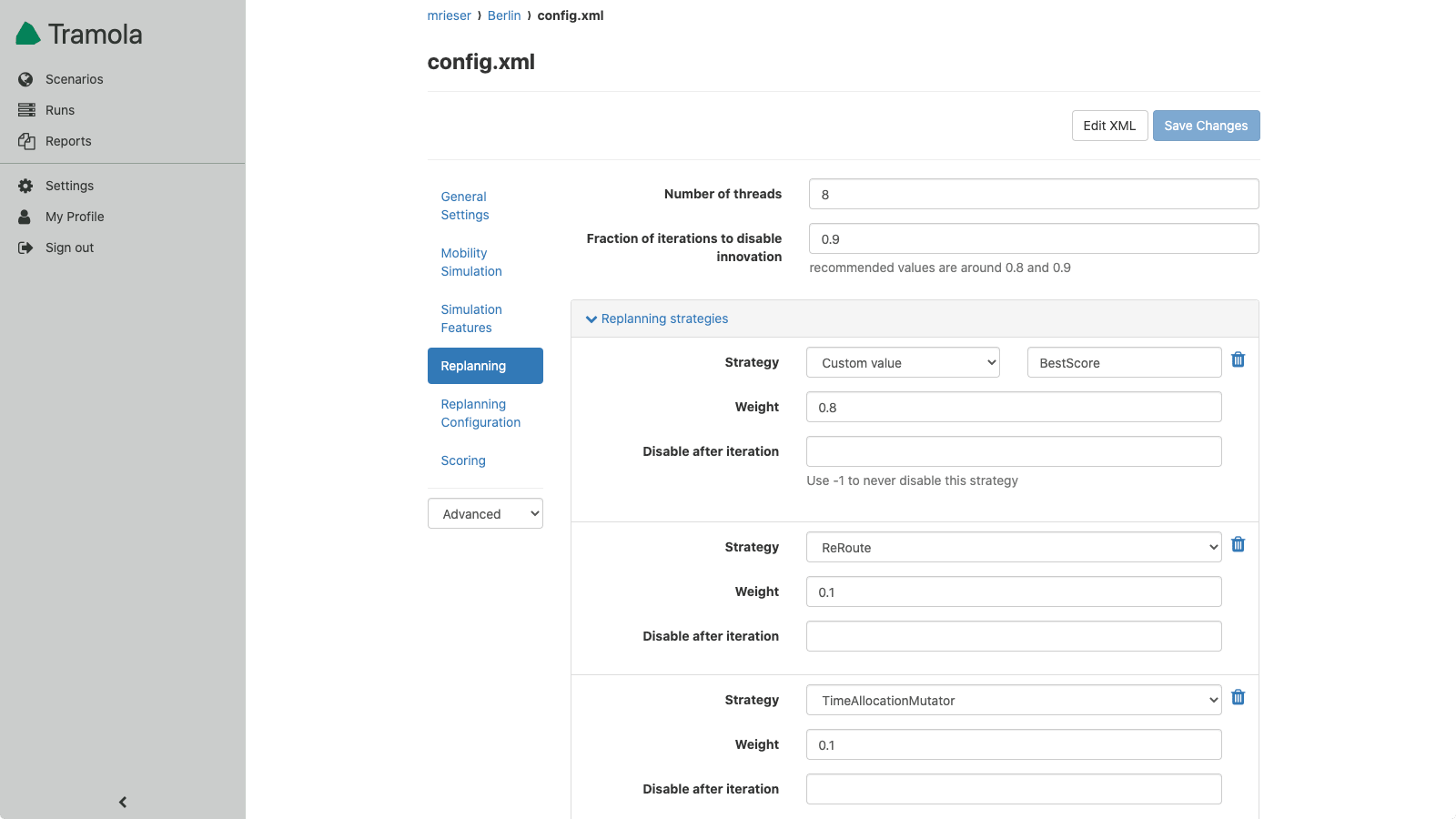 Tramola is currently being tested by a small number of users, and will be generally available in summer 2021. If you cannot wait so long and already want to test the beta version, please contact us.

In the mean time, head over to the Tramola page to learn more about the features and possibilities that open up with Tramola, and take a short survey to help us prioritize future development.