This is only a very small bugfix release, while we’re working on the next major improvements for Via. This version only fixes the issue with displaying maps from OpenStreetMap as background maps, provided by the Map-Background plugin.

Go to the Download section to get this version of Via if you’re using the Map Backgrounds plugin.

It is already time for Via 19.2. Based on various user feedback, we’ve added and improved features in Via in several places! And there is a brand new online-manual available.

Was a single number of value not enough to label your vehicles or links? Now you can define your labels to consist of multiple attribute values, each with an optional pre- and postfix. And to top it off, you can also define a background behind the label to improve the readability of the text. 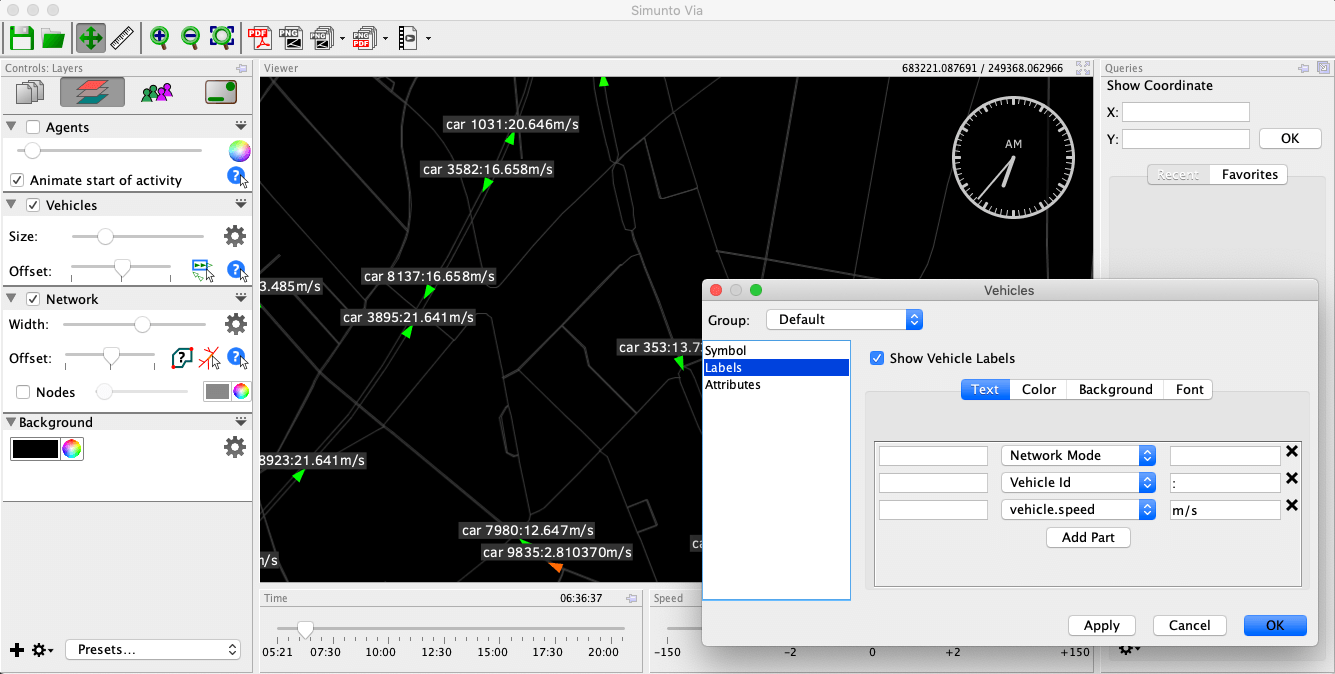 We’ve completely revamped the user-manual for Via. The old manual was provided as a pdf-file, but its age was showing. The new user-manual is now available online for easy browsing. We’ve updated all the screenshots and adapted and enhanced the text where necessary. The new format as a website also makes it easier to provide direct links to certain topics and allows for simpler updating, letting it play a better role in supporting our Via users. Have a look at the new manual and let us know how we can further improve it to meet your needs!

In addition, there were some bug fixes:

We are happy to announce the immediate availability of Via 19.1, the newest version so far.

For this version, we focused on Network, Attributes-support and Performance Optimizations, which is where you’ll find the greatest changes:

Several data formats in MATSim were recently extended to support “internal” attributes. Via now supports such attributes for Facilities and Node- and Link-Attributes from the network. In addition, the Shapes layer now also supports loading additional attributes, e.g. from CSV files, and match them to shapes or zones.

There were other, smaller performance and memory improvements in other places, and some UI fixes and bug fixes as well, resulting in the hopefully best version of Via yet.

We will publish additional news entries in the coming days and weeks, where we’ll highlight some of the aforementioned features in more detail.

Go to the Download section to get the latest version of Via!

You might have noticed that we jumped from version 1.8.3 straight to 19.1. The reason for this is simple: in the past, we often had around 1 major update every year for Via, and increased the version number accordingly. But starting last year, we published multiple updates to Via, each bringing new functionality with it. And we plan to even top it this year, by bringing you more often new functionality and improvements. In such a situation, a version number based on major/minor updates does not make sense. Instead we opted to enumerate the number of releases along with the current year: Version 19.1 stands thus for the 1st release in 2019.

It is time again for a new release of Via. The new version Via 1.8.3 brings many small improvements, while we’re preparing some larger new functionality for early 2019.

New functionality in Via 1.8.3

Go to the Download section to get the latest version of Via!

I’m happy to announce the immediate availability of Via 1.8.2. Similar to the last release, the latest version comes a number of new features despite its minor version number bump.

New functionality in Via 1.8.2

There were also a number of bug fixes, among them:

Have you observed an unexpected behaviour, or do you have a suggested for an additional feature? Don’t hesitate and send your observation to via@simunto.com.